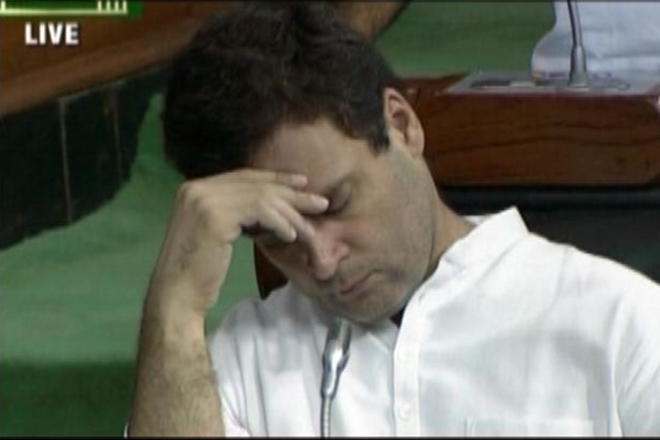 New Delhi: Congress Party Vice President Rahul Gandhi was caught snoozing in the Lok Sabha while members of his own party discussed the assault on Dalits in Una, a Gujarat town.

As the Congress benches erupted in protest over Rajnath's remarks , TV footage inescapably showed Rahul Gandhi sleeping with his forehead resting in his palm.

Considering that Congress’ has been the loudest voice protesting against this atrocity and blaming the Centre for not doing enough to ensure atrocities like this do not happen and if they do, not doing enough to bring the culprits to book and punishing them as soon as possible.

This is even more shocking considering that Congress President Sonia Gandhi has slammed the Modi government over this attack on Dalits in a state that is ruled by the Bharatiya Janata Party (BJP). Sonia went to the extent of saying that this is an example of ‘social terror’ and that it is actually being condoned by the ruling dispensation.

This however is not the first time that cameras have caught Rahul sleeping in Parliament .


However, Congress leader Renuka Chowdhury gave a clarification on party vice-president's nap, saying that he was just "resting his eyes".

As often Twitter was quick to take on the heir-in to be the country’s oldest existing political entity.

Please don't make fun of Rahul Gandhi sleeping in the Parliament. This is his best contribution to the nation. pic.twitter.com/K1HcjJe0eD

Don't wake him up! Kids get cranky if they don't complete their sleep!!#BadaBaccha #RahulGandhi https://t.co/zxx6tA4buN