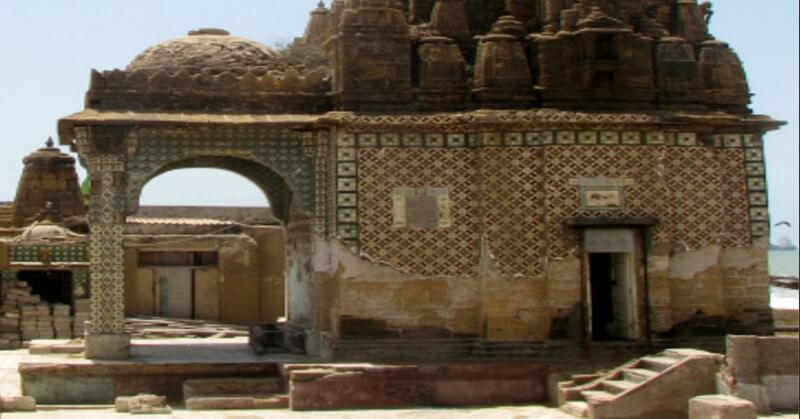 India is a place that houses more Muslims than in Pakistan and gives full freedom of jurisdiction to the mosques and respects the religious sentiments of the minorities.

But this is what happens there.

In Pakistan, a 1000-year-old Hindu temple is being used as a toilet.

Varun Dev Mandir in Manora Island Beach, Karachi, Pakistan is estimated to be 1000 years old. Around the 16th century, a wealthy sailor named Bhojomal Nancy Bhattia bought Manora Island from the Khan of Kalat, who owned most of the land along the coastline at that time and then his family took over this temple.

At present, this Hindu temple belongs to the Pakistan Hindu Council. Evacuee Trust Property Board has done nothing to protect or preserve this ancient heritage. The temple’s decayed appearance reflects a lack of care and its walls and rooms serve as a toilet for visitors to Manoras sandy beach.

Humid winds are eating into the structure and the rich carvings on the walls of the mandir are slowly eroding.

In 2008, Temple caretaker Jivraj said that he had written to the Manora Cantonment Board (MCB) for the records of ownership, but was told no such document existed. An MCB official said that since the temple area was in the jurisdiction of the Pakistan Navy, the MCB could not do much.

The temple which also houses two smaller temples, the Jhoolay Laal and Shiv temples, has seen plenty of repairs since the 1970s but these have contributed more towards damaging the building than preserving it. Unskilled people had fixed tiles using concrete, which resulted in damaging the surface of the structure.

The last Pooja ritual held at this place was in the 1950s.

It is indeed very sad news for every true Indian especially to the people who believe in God. Isn’t it so? What’s your opinion on this? Share us in the comments.

Also, check out the most beautiful temples of Hindu in the World.