2 Hunters Pose Behind A Dead Lion For A Photo: But Karma Hit Them Back, Check Video Karma always stabs any person. Whether a person believes it or not, karma definitely teaches a lesson. The same thing happened to the hunters when they were posing for a photo with a dead lion.

A YouTube video has attracted over 120,000 views since being posted on the video-sharing website on Tuesday. These two heartless morons in the video were boasting very roughly that they shot a lion using the gun. They also showcased lion’s vulnerability by clicking a picture and made fun of the forest king.

But Karma came back. When these two killers were celebrating in front of a dead lion, an unexpected thing happened. Another Lion came into the scenario and you could imagine what would have happened next. You can hear the blood-curdling scream of the woman and a few shots. A few moments later, you can see the lion walking back in front of the camera majestically. Obviously, Lions win. It would be fun for them to kill an animal but beware, karma is dangerous and you don’t know in what way it comes back. Check the video here.

So, always be good and do good to others whether it is an animal or human. Live and let others live peacefully. How did you feel after watching the video? Share us in the comments. Few heart touching stories of animals you can read here. 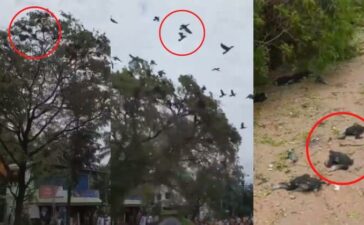