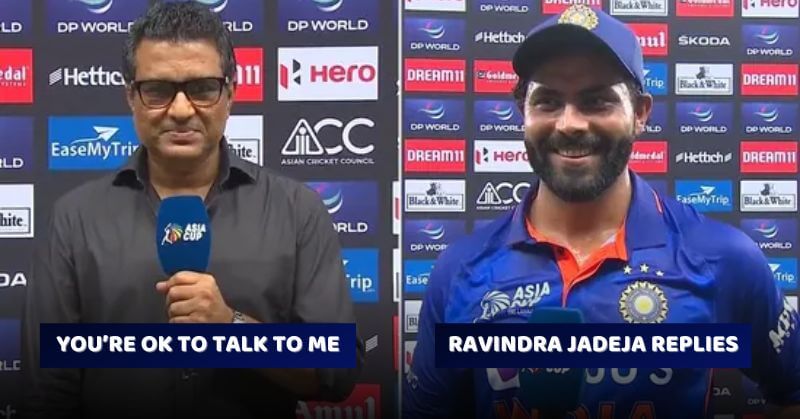 India defeated Pakistan in their first match in Asia Cup 2022. It was after 308 days that India lost to Pakistan in the T20 World Cup match. The match was a thriller, and India won the match in the last over. Hardik Pandya, Bhuvneshwar Kumar, and Ravindra Jadeja played a crucial role in India’s victory. Ravindra Jadeja scored 35 runs in 29 balls with 2 fours and as many sixes. Sanjay Manjrekar was assigned the task of the presentation and interviewing Ravindra Jadeja.

In 2019, Sanjay Manjrekar made a remark on Ravindra Jadeja and called him bits and pieces player. He said,

“I am not a big fan of bits and pieces players which Jadeja is at this point of his career in 50-over cricket. In Test matches, he is a pure bowler. But in 50-over cricket, I would rather have a batsman and a spinner.”

Still i have played twice the number of matches you have played and i m still playing. Learn to respect ppl who have achieved.i have heard enough of your verbal diarrhoea.@sanjaymanjrekar

“Still I have played twice the number of matches you have played and I am still playing. Learn to respect people who have achieved. I have heard enough of your verbal diarrhoea. @sanjaymanjrekar

The duo had a few conversations on Twitter in the last three years, and they were cool afterward. However, this was the first time they came face to face. The first question Sanjay Manjrekar asked Ravindra Jadeja was,

In response to it, Ravindra Jadeja smilingly said,

“Yeah, absolutely. I don’t have any problem.”

Here is the video clip of the presentation

India will face Hong Kong on August 31, and if Pakistan also beats Hong Kong, then India will again play against Pakistan on September 4 in the Super 4 Round of the Asia Cup. You will get all the updates related to Asia Cup on Entertales.