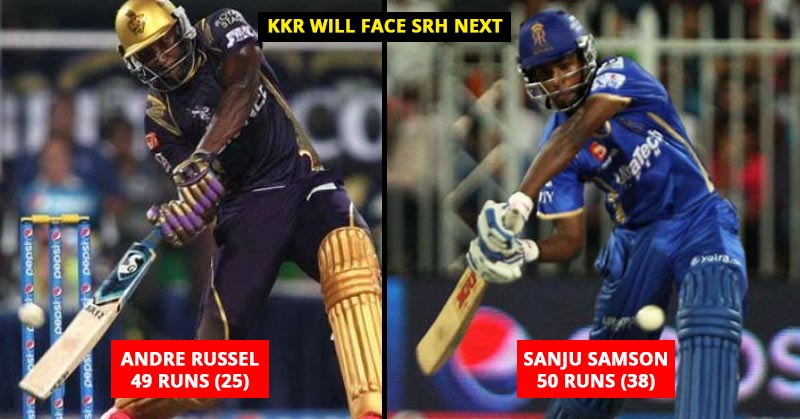 After a stunning last over victory for CSK in the first play-off match between SRH and CSK, the second play-off match was between KKR and RR. Whoever wins this match will play the third play-off with SRH and the winner of that match will face CSK in the final match of IPL 2018. Match 58, KKR vs RR was off for an interesting start. The match took place at Eden Gardens and RR won the toss and decided to bowl first. Here’s how Match 58 went down.

The highest scorer for KKR in this match is Dinesh Karthik. He scored 52 runs off 38 balls with 4 boundaries and 2 sixers. Following him, Andre Russel scored 49 runs off 25 balls with 3 boundaries and 5 stunning sixers. Shubman Gill scored 28 runs off 17 balls and Chris Lynn scored 18 runs off 22 balls. The other batsmen Sunil Narine, Robin Uthappa, Nitish Rana, Javon Searles were all dismissed at single-digit scores.  At the end of 20 overs, the team had scored 169 runs in total off 7 wickets.

A FIFTY from @IamSanjuSamson off 37 deliveries. This is his 10th in #VIVOIPL. pic.twitter.com/zRgkuOMQSW

The bowlers did a fantastic job of putting pressure on the batsmen. Though they did not score many wickets, they made sure they do not reach their target score and made it tough for them to chase. Piyush Chawla dismissed two wickets. Prasidh Krishna and Kuldeep Yadav both took 1 wickets each. Thus, at the end of 20 overs, they had dismissed 4 wickets for a total of 144 runs. As RR couldn’t hit the target score, the celebrations for KKR begun.

Here are the two teams that will play the #Qualifier2 of #VIVOIPL on May 25 at the Eden Gardens. pic.twitter.com/Gp8WqF8Lxu

It was a victory for KKR. Now they will face SRH and whichever team wins, will face CSK in the finals. Match 58 was exciting and fun to watch. KKR won the match by 25 runs. What do you think about the match? Share your comments below.