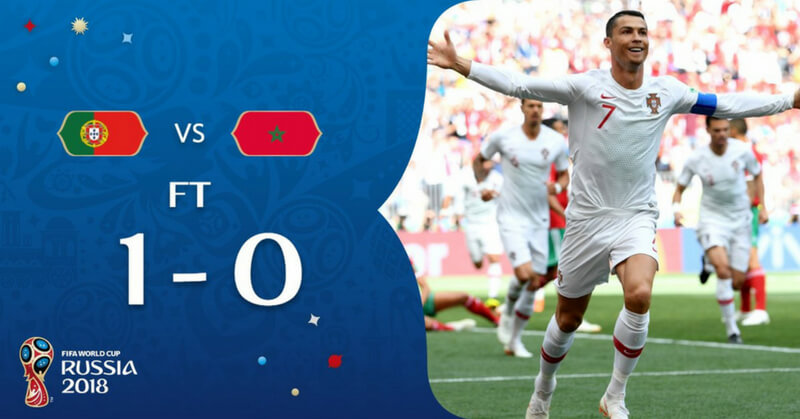 After Russia’s stunning performance in the previous day, Day 7, FIFA 2018 had three matches lined up. The matches were Portugal vs Morocco, Uruguay vs Saudi Arabia and Iran vs Spain. Check out the summaries of the matches from Day 7 below.

The match was held at Luzhniki Stadium. Their previous encounter was back in 1986 World Cup in which Morocco beat Portugal 3 – 1. The game sided with Portugal very quickly as Portugal’s striker #7, Cristiano Ronaldo scored one for his team at the 4th minute assisted by J Moutinho. This lead remained the same even after several attempts by both sides. The score remained the same through halftime and up to the end of the game. Portugal won the game with 1 – 0 score.

The match was held at Rostov Arena. This is the teams’ third encounter with each other. Luis Suarez scored the winning goal for Uruguay assisted by C Sanchez at the 23rd minute. The 1 – 0 lead stayed the same throughout the match despite several attempts from both sides. Uruguay won the game with 1 – 0 score.

The match was held at Kazan Arena. This was their first ever encounter. At halftime, the score was 0 – 0 with a tough battle from both sides. Diego Costa got the lead for Spain when he scored a goal for Spain at the 54th minute. The score remained 0 – 1 throughout the match and Spain won the match.

That’s Day 7, FIFA 2018 summarized for you. Isn’t it interesting and cool that all matches were won by  1 – 0 score on Day 7? What do you think about the matches? Let us know in the comments below. Also check out, the distance covered by sports players in an average game of their sport here.