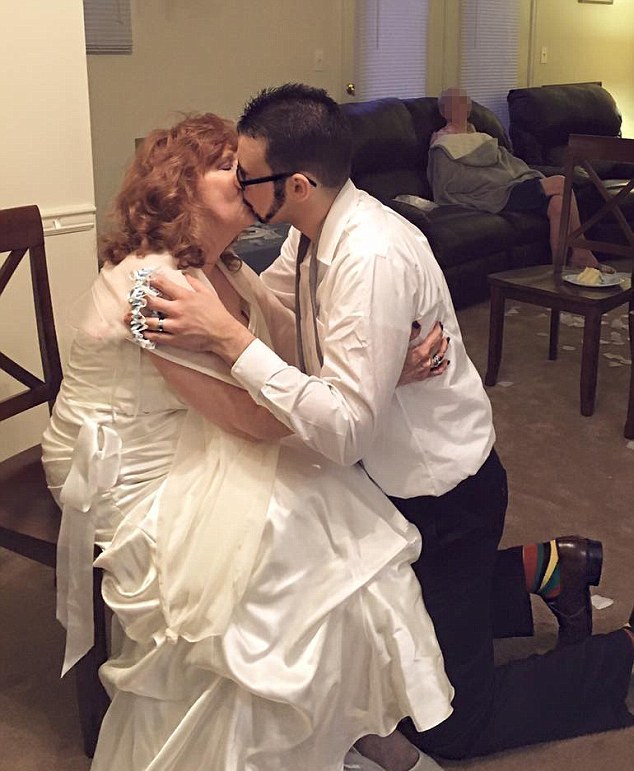 71-Year-Old Woman Marries 17-Year-Old Guy After Meeting Him At Her Son's Funeral
6.11KViews

Some say Love is blind!!

But I say, Love has no age barrier!!!

We don't know when the monsoon of  true love touches us in our lives. Once it happens, it's a miracle and splendid.

That's what exactly happened to Almeda Errell, 71 and Gary Hardwick, 17.

Almeda Errell, 71, from Tennessee fell in love with Gary Hardwick, 17, after meeting at her son's funeral. Almeda knew straight away that Gary was the man for her after bumping into him at her son's cremation. Following a whirlwind of  three-week romance, Couple got married. Gary, whose attraction to older women started with a crush on a teacher at the age of eight, said he had also been in turmoil, feeling trapped in an unhappy relationship with his 77-year-old lover. 'We were always fighting,' said Gary. 'I fell into depression and was looking for a way out.'

That's when Lisa, his aunt, invited him to join other mourners for her husband Robert's cremation.

Almeda said: 'I'd noticed this young man with a lovely smile during the service and thought, 'Wow, this is the one.'

'He was on the other side of the church, but I kept looking over at him. It was like a bright light through the grief.

As soon as he broke up with his girlfriend, he raced round to Lisa's to confess his love for Almeda.

'It was an instant thing for me too,' said Gary. 'She had the most gorgeous, sparkling blue eyes. When I told Lisa that I liked Almeda, she said that she liked me too and that she should get us together.'

He said: 'Almeda is so young at heart that age never bothers us, we never really think about it. I just know that God answered my prayers that day she walked into my life.' 'I'd been married to my first husband Donald for 43 years, and so when he died in 2013 after seven months in hospital from complications with diabetes, I found myself on my own,' said Almeda.

'I'd turn up for work at Walmart in tears and my colleagues would ask me what was wrong. Deep down, I was searching for a soul mate.

'I wasn't looking for a young man, but Gary just came along,' said Almeda, a supermarket assistant. 'I just knew straight away that he was the one.' 'We spent hours talking about everything and found we had so much in common like our love of country music and Italian food,' said Gary, who has just written a book of his life experiences called This Is Who I Am. Gary surprised her with red roses and a bracelet for her birthday which had been a few days before. Then they shared their first tender kiss under the moonlight outside on a bench. 'It made me feel like a teenager again,' smiled Almeda.

Two weeks after their first date, she had no hesitation in accepting when Gary proposed on the phone.

And six days later, after Gary had hurriedly arranged everything, budget, Almeda wore a dress borrowed from his cousin as they married in the gardens outside Lisa's flat where they'd had their first kiss. Later, on their wedding night, they had sex for the first time.


'It was wonderful, beyond my wildest dreams,' revealed Gary. 'She really is my dream woman and the physical side of our relationship couldn't be better.'


'It was the best ever,' agreed Almeda. 'I'd never had a connection like it before.'


Since their wedding in October, Gary's had their names tattooed across his chest and the couple are now living in Almeda's five-bedroom house with her daughter DeAnna, 40, and grandchildren Aaron, 21, and Indianna, 16. Gary has also started working at another Walmart store, but is applying for a transfer to Almeda's so they can be together all the time. Almeda said: 'The one thing I've learnt is that when you truly love somebody, it really doesn't matter what anyone else thinks.'