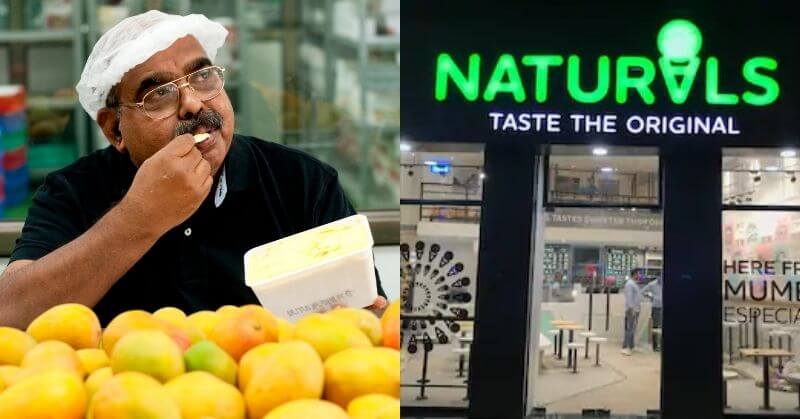 Raghunandan Srinivas Kamath from Mumbai built a 300 crore empire from the fruit vendor shop. He is the owner and founder of Naturals Ice Cream, and he opened his first store at Juhu in 1984. He is selling in the combination of Pav Bhaji and fruit-flavored ice creams to the population of Mumbai. Earlier, he had worked and learned everything about the business in his brother’s South Indian eatery. He worked for long years there with his brother’s shop.

The combination of something cold after a hot and spicy dish worked well and registered revenue of Rs 500000 in the first year from his 200-sq-ft shop in Koliwada. After one year, he stopped selling Pav Bhaji and sold only ice cream and made it brand. The converted eatery offered frozen dessert in five flavors: custard apple, cashew-raisin, mango, chocolate, and strawberry.

Today it has grown into 135 outlets in various cities. They are now producing 20 flavors of ice creams at a given time. This is how Naturals Ice Cream turned into Rs 300 crore retail businesses, which is the turnover in the financial year 2020. In a KPMG survey, it was added to India’s Top 10 brand for customer experience.

It had taken 37 years for Kamath to build his 300 crore empire. Kamath started selling Pav Bhaji with ice cream when it was rare and difficult for normal people to afford. He had not used artificial colors, flavors, and preservatives.

Srinivas, a merchant from the Puttur village of Mulki in Karnataka, lived with his wife, Shantabai. They had seven children, and Kamath was the youngest child of fruit vendor Srinivas. Kamath was born in 1954. Kamath was studied in the school where the students of classes 1 to 5 were put together and taken classes. He was promoted without considering failing in the exams. However, he liked to learn most from outside the lessons and classrooms.

Joined In His Brother’s Eatery

He often went to the field with his father, and he supported selling the fruits. He learned how to separate the fruits during this period. When he was 14 years old, his family moved to Mumbai. In Mumbai, Kamath joined a new school, but he was not good in education and failed in board exam. He was then asked to join his brother’s eatery named “Gokul Refreshments” to sell their homemade ice cream.

He wanted to add other flavors in addition to chocolate and vanilla. However, his brother was not interested in that. In 1983 Raghunandan got married. At the same time, his brothers were planning to separate the share of the restaurant. So he got some shares from his brothers. He borrowed some amount from friends and started a venture called Naturals with six staff. He managed to sell 1000 cups initially in the first week.

He added other flavors with original fruits by using fruits knowledge. It made him stand out from competitors. Some of the unconventional flavors he used are cucumber, carrot dessert, and sesame candy laddus. He also used fruits flavors like chikoos, jackfruits, litchis, black grapes, figs, and watermelon.

In 1985, he decided to stop serving pav bhaji, concentrated only on ice creams. So he started an ice cream parlor in Bombay. Some of the Bollywood celebrities like Jaya Bachchan, Raj Kapoor, Shabana Azmi, and others are his customers.

To increase the production speed of Naturals Ice Cream, Kamath built a fruit deseeding machine for fruits like Sitaphal and Jackfruits. He had numerous fruit suppliers across the country, and a dairy in Nashik supplies milk for the last three decades.

His brand had received many awards from the National SME’s Excellence Award in the Food and Agro-Industry in 2006 from Corporation Bank and various awards from different organizations.

He had not applied any MBA-level strategies, only wanted to sell fruit-flavored ice cream. Yet, all of his hard work and risk made him reach this level.

Have you tried Naturals Ice Cream? Which flavor do you like the most? Let us know in the comments below.