These Journalists Were Brutally Murdered In India For Exposing The Truth! 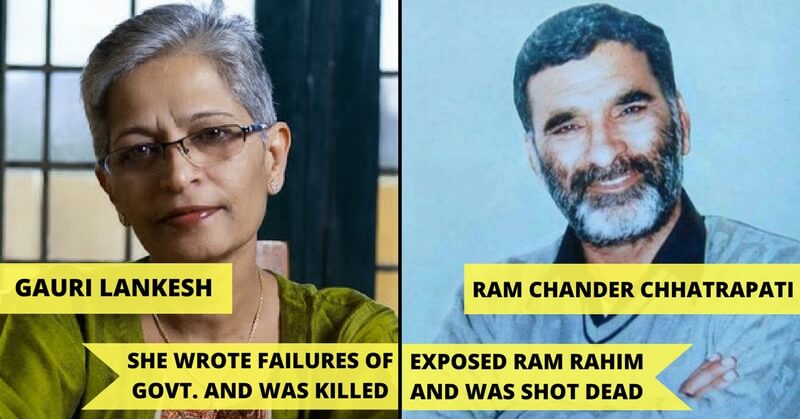 Media is the heart of society. And journalists are the source for unearthing the truth and telling the people through various medium. But that TRUTH is getting killed very harshly.

We see in movies that journalists who expose truth will be killed. But it’s true even in this real world. Yes, journalists in India are getting murdered for speaking out the truth in public and expressing their strong views against a few big guns.

The death of Gauri Lankesh has opened up the debate of freedom of speech once again. She is not the first journalist getting murdered for speaking out the truth.

India was ranked amongst the three most dangerous countries for journalists to live in according to an international report of 2015. Since 1992, 64 journalists had been killed till 2015.

And that number is only increasing.

Journalists who serves as the last resort when other systems fail to deliver justice, are now themselves starved of any sort of justice. These journalists got killed suspiciously for exposing the truth.

Well, we all know about the recent verdict against Dera Sacha Sauda chief Gurmeet Ram Rahim. Do you know, Ram Chander Chhatrapati was the main person, who exposed him. He owned an evening daily called Poora Sach in Sirsa, Haryana. He was the first journalist to publish the anonymous letters of the victim accusing Gurmeet Ram Rahim of rape charges of which he is now found guilty. On October 14 2002, he was shot dead by two motor cyclists who were later identified and convicted. Thankfully his sacrifice hasn’t gone wasted.

The murder of Rajdev Ranjan received major media attention and it was regarded as the severe threat to the journalist community. He was a journalist for Hindustan Daily in Siwan, Bihar. He was after a former Rashtriya Janata Dal MP, Mohammad Shahabuddin who was convicted for the murder of two brothers. Rajdev Ranjan was murdered by bike borne attackers from the close range.

Dabholkar was shot dead openly by two youth who fired three round and fled away. He was a very tough critic of the religious leaders who used to spread blind following among masses. He was shot dead in his hometown, Pune. His death triggered range among the media personnel.

M M Kalburgi was murdered at his residence in Dharwad by an unidentified gunman in August 2015. He was threatening the religion oriented politics that was gifting NDA unprecedented wins all over India. All his findings and write ups ended up with was his own murder.

Sandeep Kothari was a freelance writer, who used to write for the Nayi Duniya was murdered in Balaghat, Madhya Pradesh. Illegal mining and land grabbing was on the rise and was leading to a massive scam. Kothari exhaustively covered up those activities which triggered the system’s investigation.

Jagendra Singh was a brave journalist that he dared to take on the mighty minister Rammurti Singh Verma in UP. He was burnt to death by his opponent. He died in Shahjahanpur, UP on 8th June 2015. He tried to battle the might of politics with the might of his pen but the power of pen won at the cost of its owner’s life.

In early 16th February 2015, senior CPI leader, Govind Pansare was murdered under mysterious circumstances. His strong views against right-wing politics had caused lots of uneasiness among them. He was shot dead in Kolhapur while having a morning walk on February 16 with his wife. A charge sheet was filed by the SIT later that was investigating the case.

Killing truth is a big crime. Standing up against atrocities spread by politicians, religious leaders and others resulted in death of true and sincere people. If this continues, what will happen to India?

Government may not punish but god will definitely punish very harshly. It may take some time but karma comes to those who killed truth.

What do you say? Share us your valuable opinions in the comments.