12 Eminent Indian Godmen Who Are No Stranger To Controversies India is a diverse country both geographically and spiritually. So, we see new Indian Godmen emerging everyday to offer peace. However, these spiritual leaders are no stranger to controversies. Hence, today we have brought you 12 eminent Indian Godmen and the controversies they involved in. Asaram Bapu is one of the most famous religious saint in India. According to reports, he used to do some illegal stuff and eventually cover them behind his image of a religious leader. But in 2013 a 16 year old girl accused him for raping her. And, the court found him guilty. The religious leader of Kabir Pant, Sant Rampal is a murderer and nowadays he is spending some quality time behind the bars. The sixty-ninth “Shankaracharya” of the “Kanchi Kamakoti Peetham”, Jayendra Saraswati is the foremost accused of a murder. According to the accusation, he murdered the manager of Varadarajaperumal temple at Kanchipuram. Although Baba Ramdev did not commited any felony but he misguided the public. Once, Baba Ramdev stated that regular practice of yoga can cure cancer. This statement causes lot of controversies. Moreover, he was trolled on social media for this. Agnivesh made some anti religious comments on “Amaranth Yatra” which brought displeasure to Hindus. Furthermore, the supreme court condemned him for hurting the devotion of public. 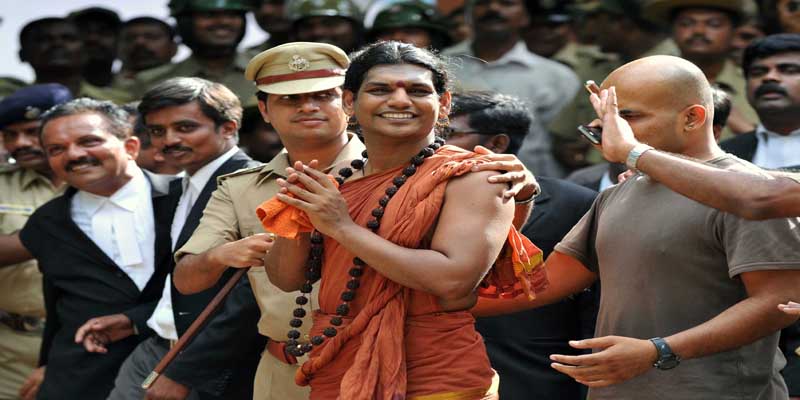 The controversies surrounded the Godmen because of his video. In the video he was in a compromising position with an actress, so no denying that was something different than his public image. He is the latest entry to our list. Gurumeet Ram Rahim is now in the police custody as he is convicted of rape. Moreover, his followers burnt down cities. Pursuing this further, they caused the death of 30 people. Sathya Sai Baba passed away in 2011. However, the controversies didn’t pass away, as he was accused of faking out miracles and doing sexual abuse. Undoubtedly, we cannot forget about Nirmal Baba. The spiritual leader claimed that your misfortune will be turned to Good luck if you switch from tomato sauce to chili sauce. Nirmal Baba clearly seems like a fraud. Hence, he is accused of misguiding the public and packing his account from their money. According to us, the spiritual leaders are the aescetic and altruist people that have no interest in money. However, Chandraswami is an exception to that. Furthermore, there were no criminal accusations against him. However, there are many accusations of monkey business and financial irregularities. Swami Sadachari was running a brothel secretly but after a little investigation the secret was revealed. Hence, Swami Sadachari has been serving behind the bars since that moment.

Speaking of brothel and Godmen? We cannot overlook this name. Police arrested Shiv murath Dwivedi a couple of times for running illegal prostitution, although he bailed out first time. However, there was no escape for the second time.

What is your opinion about these Indian Godmen? Share your thoughts.