It’s Mumbai vs Delhi in this match 9 of IPL 2018 to kick off this doubleheader day. The match is between two bottom-placed teams. Both teams will be looking to get off the mark today for the season. Mumbai Indians go up against Delhi Daredevils in this huge match at Wankhede Stadium. See how Jason Roy blasts Mumbai Indian’s bowlers.

Mumbai will play their second match at home. Both teams have had a disastrous start to the campaign facing two successive defeats. While MI lost to CSK and SRH in close encounters, DD have been blown away by RR and KXIP.

Both Delhi and Mumbai, make two changes to their side. Hardik Pandya comes back as Akila Dananjaya replaces Ben Cutting. Whereas Jason Roy makes his debut for Delhi and Dan Christian is in for Chris Morris.

Mumbai got off to a blazing start Suryakumar Yadav and Evin Lewis open for the Mumbai team and both got the team off to a flying start making 84 at the end of the powerplay. The openers went on to a 100 run stand for the first wicket. Tewatia breaks up the 102 run partnership and gets both the openers in fairly quick succession. Lewis went for 48 in just 28 with 4 boundaries and 4 sixes. Yadav went for 53 in 32 balls hitting 7 fours and a maximum.

Ishan Kishan came to the crease and looked in sublime form. He scored 44 off 23 balls hitting 2 maximums. Mumbai Indians set a decent target on the board as they ended up with 194 at the loss of 7 wickets. Suryakumar Yadav is the new holder of the orange cap.

Delhi bowlers were under pressure from the very beginning. The bowlers leaked 84 in the powerplay. Lewis and Suryakumar Yadav hit the bowlers out of the part with some effect. It was Tewatia who came to the rescue and got wickets of both the openers. There was no respite for the Delhi bowlers as Ishan Kishan came to spoil Delhi’s party. Dan Christian got DD two wickets in successive balls as got his team back into the match. Despite DD’s efforts MI set a decent target for the for the Delhi team on this flat surface. After that blazing start, Delhi should be happy with the score set as MI looked set for a total north of 220.

Delhi got off to a steady start as both the openers looked in good form and got a 50 run stand fairly quickly. Jason Roy playing his first match looked in good form scored a half-century in just 27 balls. Gautam Gambhir lost his wicket to Mustafizur. In at number 3 came Rishabh Pant who showed blistering form as he hit boundaries off the very first ball. Pant took a liking to Markande as he scored 17 off his second over. Pant departed just 3 runs short of his half-century. Glenn Maxwell was next as he went for a quick fire 13. But it was Jason Roy who was holding the key for DD who was still at the crease. Shreyas Iyer joined Roy at the crease who hit some mighty blows himself. Delhi successfully chased a big total as they won their first match of the season.

Mumbai started off poorly as they gave away runs from all ends. Mustafizur got the wicket of Gautam Gambhir who was really struggling against Bumrah. Markande who was so good in the last match was destroyed by Pant. Mumbai who would be relieved to see the back of Pant as Krunal Pandya got the crucial wicket.  Krunal also got the wicket of Glenn Maxwell. There was no rest for the for Mumbai bowlers as Iyer looked in great form. As the match went right down to the wire, it was Delhi boys who just crossed the line.

It was Jason Roy’s hard hitting that got DD their first victory. He scored 91 in 53 balls with 6 fours and 6 sixes.

Check out the last match of IPL 2018 as AB de Villiers guides RCB to victory. 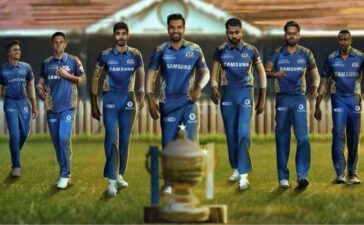