What Are Some Interesting Examples Of Movie Mistakes In Bollywood Films? We all Indian really do adore the Bollywood films and the actors. There are many movies which have interesting mistakes in them, let us see some of them: Thakur's house has no electricity as there is no power connection in the village. 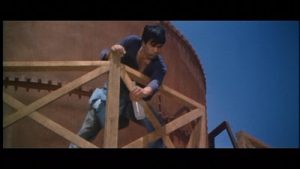 How come there is an overhead tank which would need a motor to pump the water up into the tank? It is an iconic "masala" movie in Hindi cine-world. This is how 3 people donate blood at a time.

What could be a monumental mistake in Hum Dil De Chuke Sanam, where the country that Aishwarya  Rai goes to, is mentioned as Italy, whereas the place is actually Hungary in reality. The scenes that are shown in the film are famous Szechenyi Chain Bridge above the Danube, which is Hungary and not Italy as stated in the film. During the childbirth scene, Pia (Kareena  Kapoor) shows a YouTube video during the video chat. That scene is supposed to have happened 6 years ago, when there was no YouTube. In Slumdog Millionaire, KBC is live. In which country is KBC or Who wants to be Millionaire shown live? Anupam Kher is shown tracking the escaped convict Sanjay Dutt from his computer using an MS WORD document. Now that is an undocumented feature of Microsoft!!