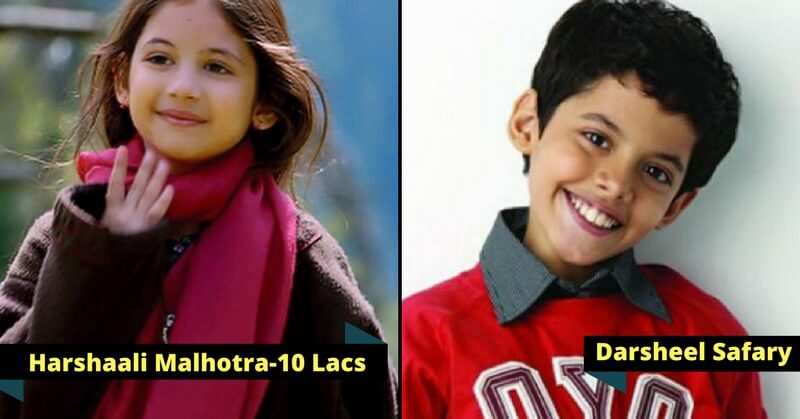 Child artists in last few years became the new phenomena and nowadays with growing demand for child character made many child artists huge stars. Few big blockbusters like Bajrangi Bhaijaan and Dangal had some exemplary child cast and these kids without any special training of shooting proved their talent and even outplayed big stars.

Income of these child stars is huge and it can make any full-time Doctor or MBA professional envy.

Let’s have a look at these 6 child artists.

Harshaali with her acting in Bajrangi Bhaijaan stole everyone’s heart and even Salman could not stop praising her on several occasions. Harsha Malhotra is a Mumbai based child artist and she got around 10 lakhs for her role. Did you feel bad about yourself ? its ok folks it’s hard to beat this 7-year-old kid.

Mikhail Gandhi is among few child artists who are quite famous in Mumbai and he has done various roles in the different commercial. The role which made him even more famous across the world is Sachin’s childhood character in the movie ‘Sachin: A Billion Dreams’ and he played it brilliantly.

Darsheel Safar is another very famous Child artists. He got famous for his role in the movie ‘Taree Zameen Par’. He was selected among the thousands of other kids after giving the audition. Safary’s performance as a struggling dyslexic child was praised by film critics and he won several awards.

Raj Arjun’s daughter Sara Arjun critically acclaimed for her stunning performance in movie ‘Jazbaa’ starring Aishwarya Rai. According to sources, she is now working on a Hollywood project alongside with Irfan Khan. She charges a very high fee and her associates are very particular about it.  She needs a separate Vanity for all her shoot.

Diya is one of the highest paid child actresses in India. She charges almost 50 to 60k for one day shoot. She has acted in many movies like Kick, Pizza and Rocky handsome.

Lead actor from the movie ‘I Am Kalam’. Harsh Mayar is a talented actor. His performances achieved international fame and most people agree that he is all time best child actor of India. Media sources stated that he got 2 lakh rupees for his 21-day schedule in ‘I Am Kalam’. He is currently one of the most famous child artists in India.

So are you thinking about your less pay salary and hours of work? Don’t forget that how much hard work they do at such a young age.

Also, read-How your favorite child artists from 90’s look like as full grown.