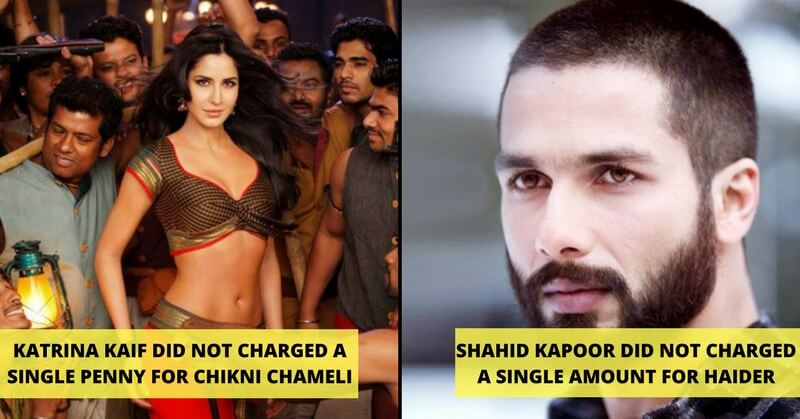 The most common belief related with Bollywood celebrities is that they charge heavy amount for their roles in movies. Even an item number may cost the director a lot. But, here we are talking about some generous celebrities who did not charge anything or charged a negligible amount of money for their significant roles.

They preferred to nourish their relationships and attachments rather than filling their pockets. Here is a list of few such kind-hearted celebrities.

Sonam Kapoor charged just Rs. 11 for her role in the super blockbuster movie ‘Bhag Milkha Bhag’. Her role was short but significant in the movie for which she charged this negligible amount.

By doing the item song ‘Fevicol’, Kareena Kapoor added sparkles to the movie Dabangg-2. But not many people know that on Salman’s request Kareena Kapoor agreed to do that item number in his film. Also, she did not charge anything for her role. She also did the song ‘Marjaani Marjaani’ for free in the movie Billu opposite Shah Rukh Khan.

Sallu Bhaijaan really has a heart of gold. Till now, he has done many item numbers on request of his friends. He did ‘Po Po’ for Ajay Devgan’s ‘Son Of Sardar’, ‘Wallah Re Wallah’ in ‘Tees Maar Khan’ and also in ‘Fugly’ for Akshay Kumar without charging a single penny.

This legendary actor has proved his kindness many times by working for free in some films. He did ‘Kaante’ for Sunil Dutt and Nargis Dutt, who helped him a lot in his struggling days. He also appeared in The Great Gatsby as the Jew Gambler for which he charged nothing.