As the Rio Olympics 2016 fervor is declining, we bring in some of the best and worst moments we heard or saw from the stadium and the country as such. There are winners and there are losers in every game and there are always a few who win our hearts even when they don't win the match.

What is common between two Syrian swimmers, five track athletes from South Sudan, two judokas from the Democratic Republic of Congo, and an Ethiopian marathon runner? Yes they form the Team refugees. All hailing different countries, they competed without a home, a team, a national anthem or a flag to call it theirs. Yet Rio Olympics offered them a chance to prove the international brotherhood that Olympics stood for. 2. Underdog to the top

Brazil, the host of Olympics 2016, had another reason to cheer. The country's first gold medal in judo was nabbed by Rafaela Silva, who grew up at the city's favela which is the country's equivalent to slums. Riddled with drug traffickers and mafia the favela known as City of God, brought out to the world sportsmen shining even from the poorest. 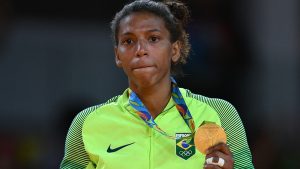 
3. Final Match for Gold in Badminton

No Indian list would be complete if there was not a special mention to our very own PV Sindhu. She played against Carolina Marin of Spain in the final. Even if she didn't win the gold, she with her indomitable spirit made sure she was the beti we would all be proud of. 
4. Shame on you body shamers

Alexa Moreno from Mexico looks unlike the petite gymnast from the other countries and was attacked by people, who have no knowledge or respect to the sport or human, shaming her weight and image with offensive tweets and images. Her supporters ran to her rescue but by then the Mexican gymnast had her attention all for the wrong reasons. If there was something that Rio Olympics helped us understand about the developing nations, it is the poor sanitation that its people have to face on a daily basis. Swimming and sailing athletes were asked to swim without opening their mouths, thanks to the news about sewage seeping into the practice facilities. It makes us wonder about the fact that most Brazilians had to drink and live in those conditions.