World’s Most Dangerous Rides That Killed People! #5 Is Scariest 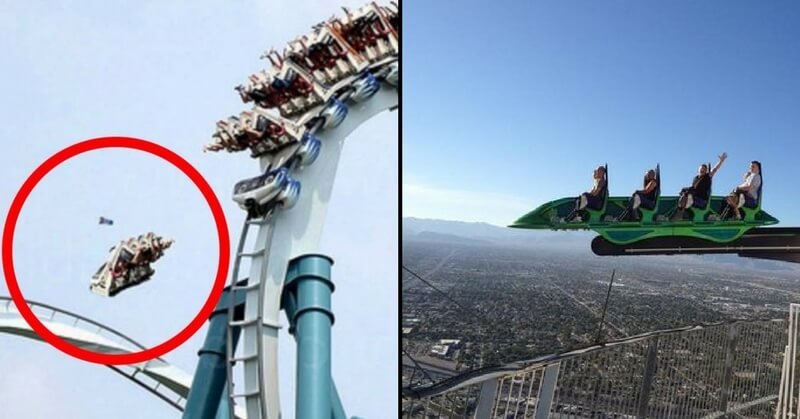 In these dangerous rides, I will be showing you the scariest attractions that shouldn’t be opened. Now, some of them are closed because of fatalities, others are still up and running. Make sure you read this list through before you go to your next amusement park of scary rides.

Just look at that picture, does it look safe to you? This attraction was pretty much like giving you a sled, a good luck and off you go! You had your own brake if it didn’t work, or if you didn’t use it, you would get off-track – no question. This ride led to numerous injuries including one death where someone went off track and cracked his head into a rock.

Think twice before you take this dangerous ride on in the amusement park Six Flags, New England. In 2001 there were 22 people who suffered injuries. And in 2004, a man got thrown off the cart on the ground, he died instantly.

“The world’s safest roller coaster” as it was called, replaced its reputation in 1986 when four bolts came loose causing one of the carts to go off track and crash into a pillar. The incident led to three deaths.

This ride does not has a good reputation. Not for just one location but multiple. It’s a dangerous ride because of several deaths and injuries over a long period of time.

This roller coaster is known as the “ride of the death”, was built in 1911 with extremely little safety requirements. “Only” 3 people died due to this ride. But lots of people suffered injuries from 1911. Then it was demolished in 1936. This ride should never have been opened.

One of the attractions that just smells ” upcoming accidents”. With high speed, crowdedness and both small children and grown men riding this slide at high speed surely must cause a collision. And so it has! This attraction must have a record of injuries due to people sliding over the low dividers between the lanes and also crashing against each other at the end of it.

This was a star attraction back in the day but was closed in 1972 because of a huge accident. One of the carts got removed from the rope and crashed into another one behind causing the death of 5 children and another 13 injured.

8. The Big One, Blackpool, England

The big one came out in 1994 and was the “coolest” amusement park ride in the world. It offered a maximum speed of 120 km/hour ( 74mph). It seems maybe the speed was too much for the old roller coaster because a total of 46 people suffered injuries on this dangerous ride.

This ride gives you the feeling of riding a rocket ship into space. Unfortunately, in 2010, the thing became the “real deal” because a total of 6 people lost their lives and 10 injured due to a mysterious explosion inside this spaceship. Nobody knows exactly how it happened.

Batman the ride is a popular attraction in the amusement park, it is however one of the most dangerous. It’s not the people IN the ride who faced injuries, no, it’s the people walking underneath it. The ride goes so low in so high speed that anyone walking underneath it is making a deadly decision. Two such incidents happened in 2002 and 2008 where first a staff member was kicked in the head and died. The second time, a teenage boy snick into the park, and The Batman ride killed him too.

Aren’t these rides too scary? Surely they took away lives and killed many people. And later the government banned them from running. Liked the article? Read more about These Are The Most Dangerous Railway Routes In The World!