Watch Second Video Of WC Abhinandan From Pakistan; People Praying For His Safety 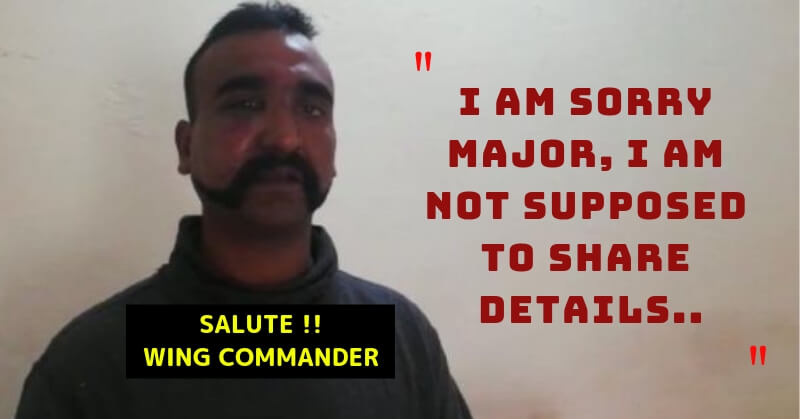 India took the revenge of Pulwama attack when Indian Air Force crossed LOC and dropped 1000 kg of explosives at Jaish-e-Mohammed camps. This destroyed many camps and eliminated many terrorists.

Pakistan warned after the incident that they will retaliate. Today Pakistan has taken down our one fighter jet and unfortunately our one Indian Airforce Pilot and Wing Commander Abhinandan is in their custody. After the arrest of Abhinandan, the video has been circulated from Radio Pakistan informing about the same. In the video, Wing Commander introduced himself as Abhinandan and has not revealed any sensitive information to them.

The Indian Government has confirmed that our one pilot is missing and Pakistan claims that they have our one pilot. Now another video of WC Abhinandan is out and in which he mentioned that he has been treated well by the Pakistan Army and they also saved him from an angry mob. Although, when he was asked about the brief information, he denied giving answers by saying being an army man he is not supposed to share the details. You can check out the video below.

Entire India is praying for our Wing Commander and even #BringBackAbhinandan is trending on Twitter. Various people and celebrities are praying for him and his safe return. Check out the tweets below.

Stay strong #WingCommanderAbhinandan I salute your dignity and calmness. It brought tears to my tears . Salute to you and your family !! An entire nation stands with you Sir!

Such courage, dignity , honor and grace under pressure. My thoughts are with you #WingCommanderAbhinandan #respect

Heartbreaking yet thought provoking the images of our #WingCommanderAbhinandan captured by Pakistani army. Yes emotions run high, yet all one can wonder, Is war really the road to peace here? Just pray that Abhinandan returns home peacefully and safe.

I join millions of Indians in praying for safe return of WC #Abhinandan. Admire the courage with which he is facing the situation, calm, composed and strong. I appeal to the Pak Authorities to treat him well and ensure his quick and safe return to India.

Strength and resolve to the family and loved ones of #WingCommanderAbhinandan. The nation’s prayers and thoughts are with him in this tough hour. May this stoic, dignified officer be back on Indian soil soon.

Thoughts and strength to #WingCommandarAbhinandan amd his familly….India stands tall and proud with you….

Salute #WingCommandarAbhinandan for his dignity & calmness in dealing with his captors. Praying for his safe passage back to India.

We all applauded the IAF yesterday and we are proud of them. Now let’s all pray for Wing Commander Abhinandan to return home safely and both countries to solve this situation without bloodshed on either side.

May we all raise our voices for peace, and may those in power listen. May all our soldiers stay safe and all the warmongers on television and on social media go get killed on the front. https://t.co/3cAbkTLCrk

It’s a war against terror not between 2 nations yet. Dear Media —-you can actually stop this escalation .. please let’s be responsible and work towards peace.

This is war against terrorism not between two nations. Praying for the safe return of our Wing Commander Abhinandan Varthaman. #Abhinandan #AbhinandanVarthaman#bringBackAbhinandan #BringAbhinandanBack

We are praying and wishing to see our commander back to our nation. Also, check out the air strike video of Pulwama revenge.