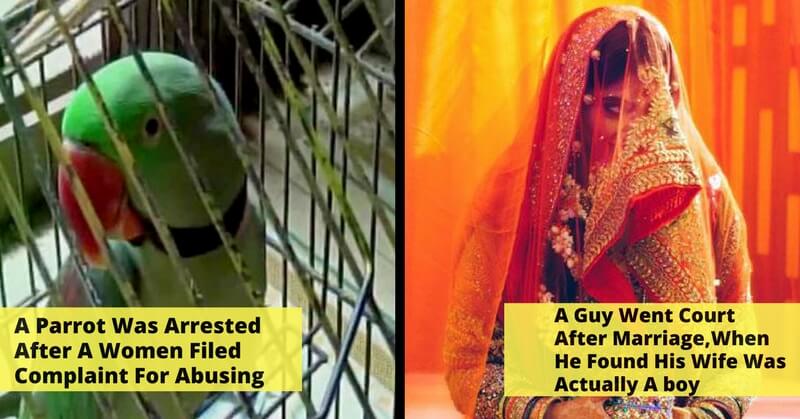 In a country which is this big and population is 130 crores, it is very important that our judicial system should work firmly and fairly. Whenever there is a dispute between two individuals the best place to settle it out, is court. Citizens of India have an immense faith in our legal system.

In a strange case, police arrested a parrot named Hariyal. Hariyal was trained to abuse the owner’s stepmother. Suresh Sahkarkar along with parrot booked for training the parrot. It used to make the abusive comment for the senior lady. Everytime lady used to pass parrot used to start abusing her, finally, lady filed a police complain about this verbal offence. Police had no other way but to book the parrot.

Akku Yadav a serial rapist was lynched by women in the courtroom. When the court asked women, each of them took responsibility and their excuse for this act was that police was not listening to them. Eventually, the court suspended the case.

Ranveer Singh Yadav, fought 40 years to prove that he is innocent. Ranvir Singh Yadav was accused of taking 5 paise extra from a passenger. After many years of the court trial, Ranvir Singh finally won the case in 2016. Lacs of money was spent on both sides, for the money which doesn’t even exist in the current economy.

Nothing can be more bizarre for a newly married boy. 37-year-old Balakram, a resident of Uttar Pradesh married a dancer and to marry her he paid 50k INR. But what shocked him that his bride turned out a boy instead of a girl. The case went to court.

Lal Bihari born in 1955 and declared dead in 1975. The whole case was planed by his uncle who bribed government officials and they issued a death certificate of Lal Bihari. Lal Bihari fought a long battle to prove himself alive. Finally won in 1994, His personal case inspired him and he started an organization which handles the similar kind of cases.

So funny court cases don’t just happen in movies but in fact, movies are inspired by true events and here is the proof.

Are you curious about the death execution and why it takes place so early in morning? here you go!