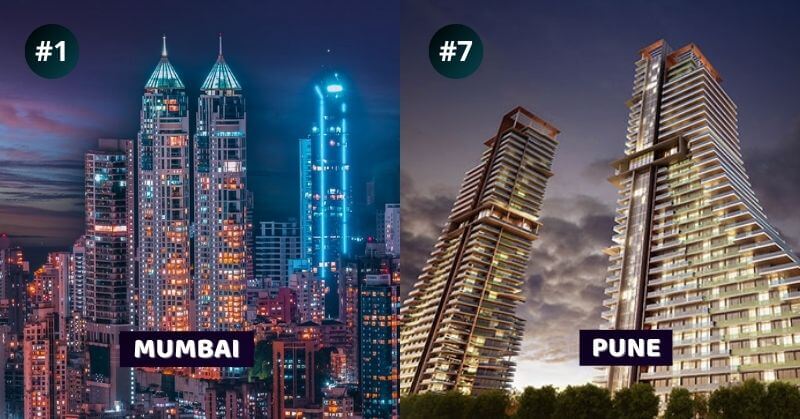 Mumbai tops the list of the richest cities in India. It has a GDP of $310 billion and is the 12th richest city in the world. It is the home of 56 billionaires and 46000 millionaires. Mumbai, the financial capital of India, is the largest city in India.

It is the home of important establishments like the Bombay Stock exchange and Reserve Bank of India. It is also home to companies like Tata Group, Aditya Birla Group, and Reliance Industries Limited.

The national capital of India, Delhi, is second in the list of richest cities in India having a GDP of $293.6 billion. The health service industry and telecommunication are significant sources of Delhi’s economy. And other factors that contribute to GDP growth are media, land, retail, and data innovation.

Kolkata is the capital of West Bengal and third in the position of wealthiest cities with a GDP of $150.1 billion. It is the commercial and financial hub of the eastern region. It has headquarters of several IT companies, public-sector banks, and private banks. In addition, 83% of the city’s workforce are employed in the tertiary sector.

Bengaluru is the capital of Karnataka and hub of IT companies, and so it is regarded as the silicon valley of India. It is ranked fourth in the wealthiest cities and has an estimated GDP of $110 billion. It is the second-fastest-growing city in India.

Bengaluru is the destination for industrial developments. It is home to Hindustan Aeronautics and has engineering centers for companies like Airbus, Boeing, etc.

Chennai is the Gateway of South India and the capital city of Tamil Nadu. It is the cultural capital of South India. It is named “Detroit of India” as it plays a crucial role in India’s automobile industry. And other sectors contributing to the economy are computer, technology, hardware manufacturing, and healthcare. With a GDP of $78.6 billion, Chennai is in the fifth position.

Madras stock exchange is India’s fourth stock exchange. According to the confederation of Indian Industry, Chennai is estimated to reach $100 billion by 2025. Chennai hosts the headquarters of automobile industries like Ford, BMW, Nissan, etc.