Top 10 Military Powerhouses Of The Modern World In 2017 Talking of today's world, army and economy- these two terms define the strength of a nation. Some of these nations are allied, some at war and some are dealing with rising tensions. The reasons might be different but the outcome always the same, the mightier one wins. Armies and nations have existed from centuries. But it was the WW1 which transformed the whole military arena completely. And then happened WW2. New nations, new armies, new weapons emerged. And the list is still changing every decade. Let's take a look at the top 10 armies in the world as of 2017-

1. The United States Of America Undoubtedly, United States, the superpower nation, tops our list with a huge arsenal of nuclear weapons. Though its manned power is much lesser than China and India, at around 2.5 million active and reserved soldiers. But they are more trained and used highly advanced weapons. With 14,000 aircrafts and 415 naval vessels, special operation teams, 19 aircraft carriers and $581 billion defence budget, USA dwarfs every other nation on this planet by a wide margin. Even its allies and organisations such as NATO and the amount of oil it produces give it an edge over others. 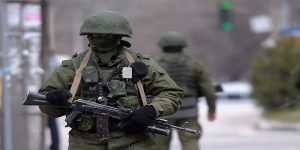 America's cold war opponent, Russia occupies the runners up place. Though a relatively small manpower of 2 million soldiers, Russia boasts of the largest nuclear arsenal in the world, some very advanced weapons and highly trained soldiers, 350 ships and close to 4000 aircrafts and special operation teams. Though economy and number of allies remains Russia's biggest problems. The world's 2nd largest economy also comes second in its military spending after USA. Having the largest manned power on planet with 2.5 million active personnel, 3000 aircrafts and 700 ships and a cyber-warfare division, China is currently working on the advancement of its huge weapon arsenal. The 7th largest economy in the world and the largest democracy, India boasts of an army which occupies the 4th position in the world. India has developed tremendously after its independence in 1947. With the 2nd largest manned force in the world, a huge $53 Billion military budget, a strong air-force with 2,000 aircrafts including Apache and Globemaster and 300 ships, its strategic position and large number of allies, India continues to modify and expand its military power to rise further on the list. A century before and this nation would have made it way to the top of its list. The navy of UK is still small with less than 100 ships; still the military power of the UK is none the less. With a defence budget of $60 billion, Special Forces teams, a stable economy and a strong air-force makes UK a force to reckon with. With 400,000 army strength (active and reserved) and 1300 aircrafts France comes 6th in world and 2nd in EU after UK. France has the 2nd largest military budget in EU and 10th largest worldwide, and is looking forward to modernize and expand its power to the level of its pre 1900 might. 2,500 tanks. 1,500 aircrafts. 166 naval ships. This is South Korea. With a strong ally in USA, which trains and funds South Korea's military to a huge active and reserved count of 3.5 million, South Korea is currently more focuses on its economy and peacekeeping missions. Germans vs. the rest of world. That was in the 19th century. And the German forces used to be a great fear for other countries back then. With the strongest economy in EU and a well-funded military with a $36 billion budget, Germany is still no less and deserves its position amongst the top 10 world's militaries. The quick adjusting though relatively smaller, Turkey has 1,000 aircrafts and nearly 200 ships at its disposal, thus making to the number 9th spot in our list. With a strong ally in USA, highly modernized weapons and a strong economy, Israel chips into our list at the number 10th position.

So, what do you think about these military powerhouses. Do tell us in the comments below.