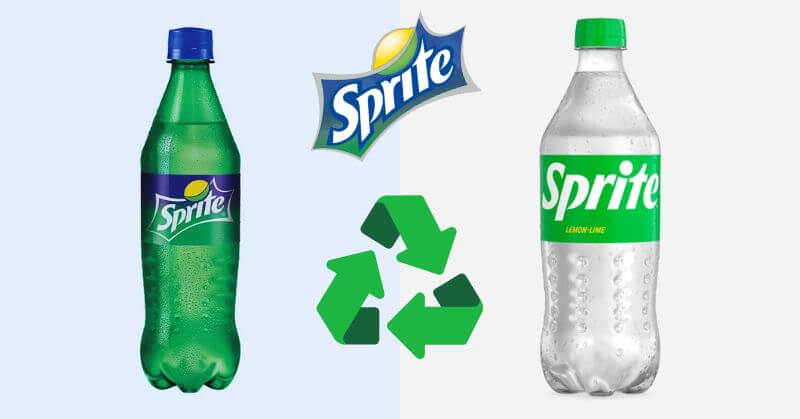 Sprite is one of best selling soft drinks in India. The Coca-Cola Company produces the colorless, lime-flavored soft drink known as Sprite. Sprite was mainly manufactured to compete with 7 Up from Keurig Dr. Pepper. Sprite has been on the market in its famous green bottle for many years. One of the most recognized soft drink brands when entering a store is the one with the green bottle.

Since 1961, when Sprite was initially introduced in the US, its packaging has been green. As a result, Sprite has reportedly been one of the company’s best-selling drinks. However, all of that is going to change.

Why Is Sprite Changing Its Iconic Green Bottle?

Sprite has announced that it will no longer use green bottles and favors clear white plastic ones. They claimed that they are more environment-friendly. Hence, starting on August 1, it entirely switched to transparent PET plastic packaging. Despite being recyclable, green PET is more frequently made into one-time-use products. These include materials that can’t be useful in recycling the new PET bottles, such as carpets and clothing. Green and other colored PET are separate from clear material during the sorting process. To produce new PET bottles, food-grade recycled packaging must not degrade.

That is a valid reason to change. The company that makes Sprite, Coca-Cola, is in charge of producing 100 billion plastic bottles annually. However, the EPA estimates that just 29% of those are being recycled. That’s not very good. By 2030, the company intends to collect and recycle every bottle it sells worldwide. This goal was first announced in 2018. By 2025, it additionally aims to have all of its packaging recyclable. This is a crucial step since it enables recycling Sprite bottles into new plastic bottles.

There is less new plastic by recycling existing plastic bottles into new plastic bottles. Less plastic ends up in landfills, parks, or the seas as a result. The transition is simultaneously bittersweet. Even if the change is beneficial, it marks a significant shift from what Sprite has come to stand for. When the news was out, some consumers were sad. They claimed that they couldn’t imagine drinking Sprite from anything other than a green bottle. Sprite remains unchanged apart from the color of the bottle.

Nevertheless, that changes how people perceive things. This change will help drive a circular economy for plastic. Coca-Cola recently said that the Dasani brand of bottled water would also use recycled PET plastic. This will cut plastic waste by 20 million pounds, the company’s press release claims. When compared to what it was in 2019, it is.

However, if the modification results in less plastic waste, it is worth it. Coca-Cola only needs to persuade people to give less consideration to the color of the plastic. Instead, it may impart additional knowledge about what people do with it after they finish drinking.