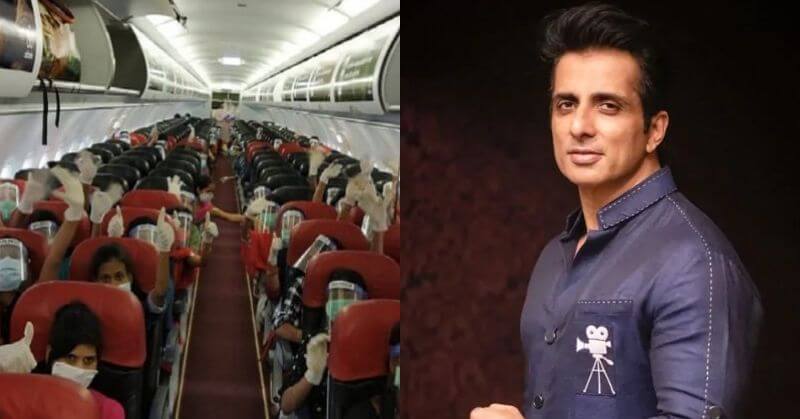 India is now the tenth affected nation in the world from a coronavirus pandemic. Due to lockdown, many migrant workers and students stuck in several parts of the country. Bollywood Actor Sonu Sood has been a knight in shining armor for many people. The actor has shown generosity and console many and assured them that they would meet their family soon. He is helping migrant workers return to their home towns from Mumbai amid the lockdown for the past two months through his Ghar Bhejo initiative. Sonu Sood has sent migrant workers to their homes in states like Karnataka, Uttar Pradesh, Bihar, and Jharkhand. Now he has airlifted 177 girls from Ernakulam, Kerala to Bhubaneswar, Odisha.

A close source of Sonu Sood informed that the girls stuck in Ernakulam, Kerala, due to lockdown. They were working as a stitching and embroidery laborers at a local textile factory there. The factory got closed due to the coronavirus pandemic. Because of this, they were all stranded without proper arrangements. The girls belong to the village Kendrapara in Odisha, which is approximately 2000 km from Ernakulam.

A source said that someone came to know about Sonu Sood’s Ghar Bhejo Initiative and contacted him. Since it was difficult to send these girls home via road, Sonu Sood and his team decided to airlift them from the Cochin airport. Both airports Cochin airport and Bhubaneshwar airport operated for a few hours. A special aircraft has been arranged from Bengaluru to airlift the girls. The flight also transported ten migrant laborers working in the plywood factory. Sonu Sood sponsored the tickets. The aircraft departed from Cochin airport at 8 AM and reached Bhubaneshwar at 10:30 AM. The buses were also arranged for the girls from Bhubaneshwar to their hometown Kendrapara.

According to sources, since Sonu Sood launched the helpline number, he and his team are getting around 50 to 60 thousand calls from across the country. Sonu Sood and his team are spending sleepless nights and helping more migrants to reach back to their homes. He said he would continue sending migrants home until the last one reunites with his family.

Not only this, but he has also provided meals to thousands of underprivileged people, and his Mumbai hotel for the accommodation of the healthcare workers. Previously, he has donated over 1500 PPE kits doctors across Punjab.

Sonu Sood, the words are less to express gratitude for you. The entire nation is appreciating your work for humanity. Man, what a gentleman he is. We have massive respect for you brother Sonu Sood.