Match 42: IPL 2018, Delhi Daredevils had a tough task ahead of them as they had to go through Sunrisers Hyderabad. Delhi Daredevils were looking forward to making a short work out of SRH. However, the Shikhar Dhawan and Kane Williamson turned the tables and led SRH to victory by 9 wickets.

Winning the toss, Daredevils opted to bat first. However, the problem started early. Prithvi Shaw and Jason Roy lost their wickets in the fourth over and only 21 runs were added to the scoreboard at that time. The powerplay overs were not good for DD as they lost 2 wickets on 38 runs after 6 overs.

Rishabh Pant and Harshal Patel added 55 runs for the fourth wicket and that paced up the scoreboard a bit. Harshal Patel contributed 24 runs before he was run out.

Rishabh Pant held his end and played an amazing inning. He completed his century and took the team to the score of 187/5 in 20 overs. Rishabh remains not out and he scored 128 runs in 63 balls hitting 15 fours and 7 sixes.

DD Bowlers Were Starving For Wicket

SRH started their long chase and the DD bowlers got rid of Alex Hales early. After that Shikhar Dhawan and Kane Williamson kept the DD bowlers starving for wickets. After the end of 6 overs score of SRH was 51/1.

Shikhar And Kane Led The Team To Victory

After the powerplay overs, Shikhar Dhawan and Kane Williamson continued their punishment on DD bowlers and took the score to 105 runs in 11 overs. However, the victory was still far. Both Shikhar and Kane completed their half-centuries and led the team to victory in 18.5 overs.

Shikhar Dhawan’s unbeaten 92 helped him to clinch the man of the match trophy. What do you think about today’s match? Share in the comments. 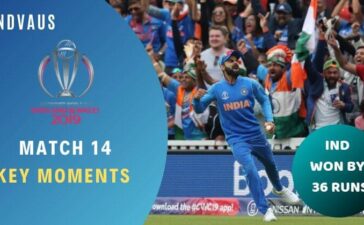