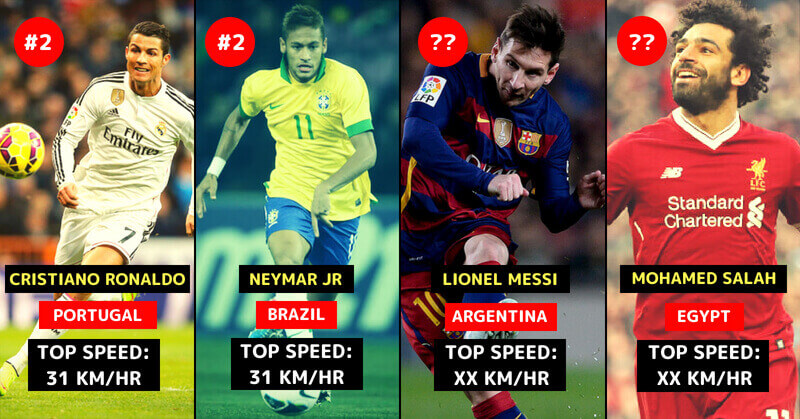 According to UEFA, Mohammed Salah of Egypt proved to be the fastest player in the Champions League ended in May 2018. He left behind Lionel Messi, Neymar Jr, and Cristiano Ronaldo. Salah’s top speed was 33 km/hr during the match. However, in this case, Messi is at the bottom with speed of 28 km/hr. Brazil’s Neymar Jr. who played for Paris Saint-Germain and Portugal’s Cristiano Ronaldo who played for Real Madrid played the fastest speed of 31 km/hr.

Check Out How Fast They Are

With the small, squat build of a sprinter, Messi has incredible acceleration from a standing start. He bursts out of the blocks and reaches full speed within five yards, the kind of pace which defenders find so difficult to deal with. His short stride means he is also able to change direction at nauseating speed while keeping control of the ball. His top speed is 28 km/hr.

Neymar da Silva Santos Júnior, commonly known as Neymar Jr. or simply Neymar, is a Brazilian professional footballer who plays as a forward for French club Paris Saint-Germain and the Brazil national team. His top speed is 31 km/hr.

According to FIFA, Cristiano Ronaldo’s fastest speed is 31 km/hr. Cristiano once sprinted 96 meters of the pitch in only 10 seconds against Atletico Madrid.

Being left-footed helps him fool defenders, leaving them off balance and making himself look a bit faster than he is as he steps by them. He is the fourth fastest player on Liverpool. His top speed is 33 km/hr.

Insane amounts of practice and training are needed to have the physical fitness needed to achieve these kinds of speeds. Living the life of a famous sportsperson is not so easy after all. What do you think about this? Let us know in the comments below. Also, check out the distance covered by athletes in each sport, here.