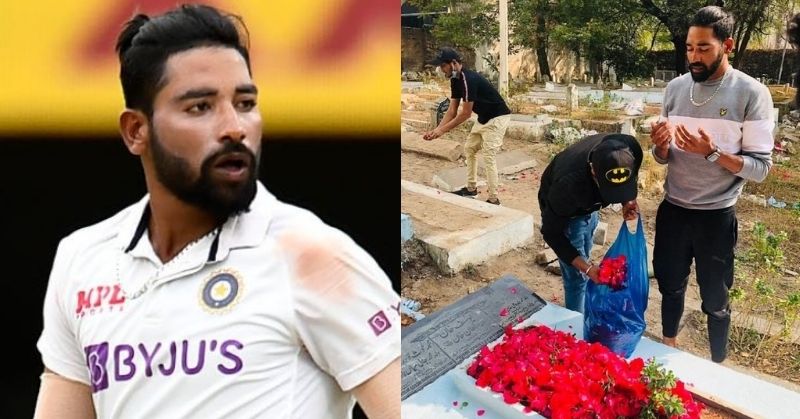 Mohammad Siraj directly drives to his father’s grave from Hyderabad airport. India defeated Australia 2-1 in one of the greatest ever Test series. Many players played a crucial role in India’s victory over Australia. One such player is a fast bowler Mohammad Siraj. He took a crucial five-wicket haul in the second innings of the fourth Test. We have seen how Mohammad Siraj got emotional during the National Anthem in Sydney. The 27-year-old fast bowler lost his father when he was touring Australia with the national team from UAE. However, he chooses to stay in Australia, gave preference to National duty. He stayed back with the team in Australia to fulfill his father’s dream. Mohammad Siraj has shown amazing sportsmanship in the tour match.

His father, Mohammad Ghaus, had a dream of his son playing Test Cricket for the country. He was an autorickshaw driver. He did whatever he can to make Mohammad Siraj an amazing cricketer. However, before he can make a debut in whites, his father had passed away. Mohammad Siraj called her mother from Australia. She gave him the courage to stay in Australia and fulfill his father’s dream. He made his debut in the second test in Melbourne. In the fourth test at Brisbane, there was no Jasprit Bumrah. Mohammad Siraj led the bowling attack and even took a five-wicket haul in the second innings.

According to the reports, Mohammad Siraj did not head home after landing in Hyderabad. He went directly to his father’s grave. He said,

“I didn’t go home, directly. I went to the graveyard straight from the airport, I went there to sit with my dad for some time. I couldn’t speak to him but offered flowers to his grave,”

“And then I came home. When I met my mom, she started crying. Then I tried to console her, telling her not to cry. It was a different feeling. After 6-7 months, her son had come home. Mom was always waiting for me to return. She was counting down how many days were left for me to return.”

Mohammad Siraj, you are a true hero. He has been selected for the upcoming series against England in India. There are a lot more to achieve, Siraj; it is just a start. Wishing you all the very best for your future. May you bring many more victories to India.